We started our journey at a crisp 7:00am, with a vast majority of us walking around like zombies. A six hour journey loomed but surprisingly it went pretty quickly to a playlist of fantastic music which Ms.Lomas loved.

The highlight of our day was the London Dungeons. Ms.Lomas warned the taller lads that they'd be picked on, and as usual she was more than right. Head Boy Tom was forced to wear women's clothing, embarrassed and used to demonstrate medieval torture methods (some of which were quite eye watering) .... Mrs.Simpson was bundled into a cage much to her delight, and a terrifying drop to our 'deaths' ended an overall very pleasant experience. 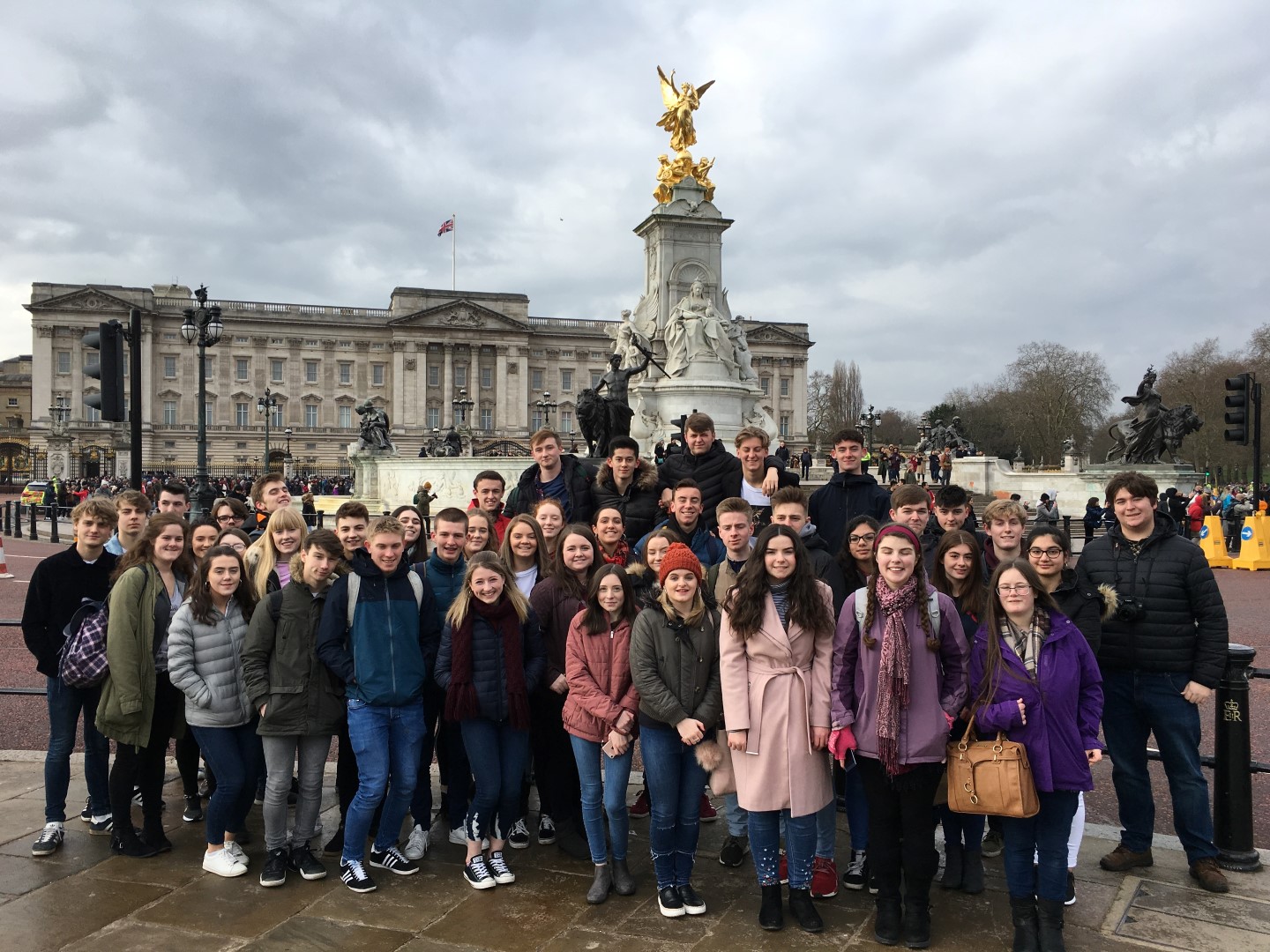 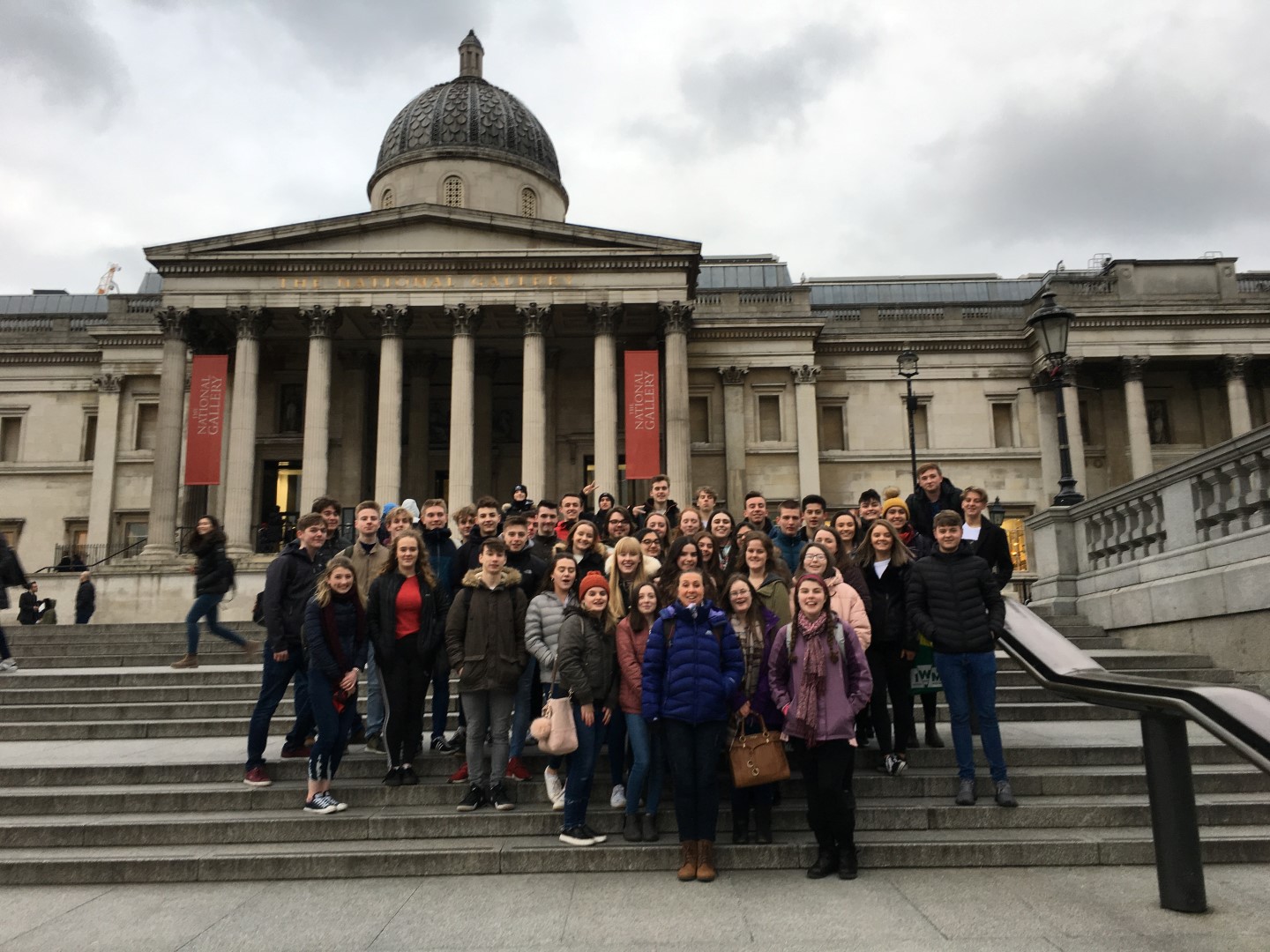 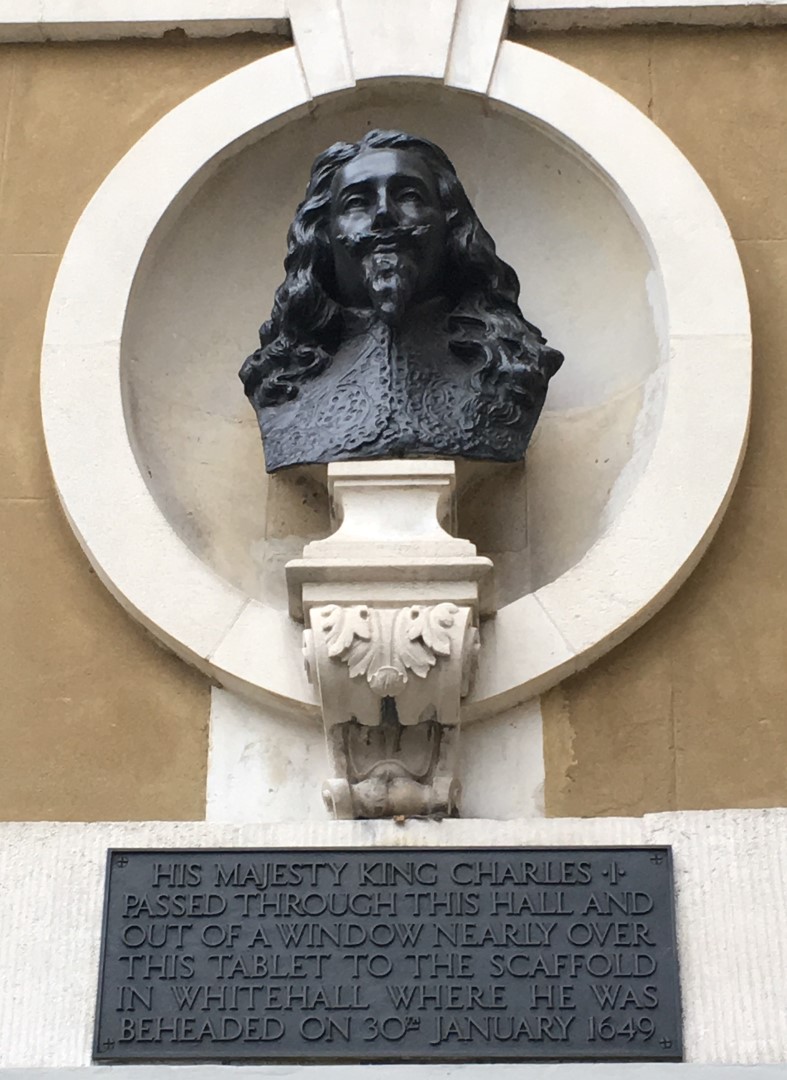 We went to see the Whitehall Palace Banqueting Hall on Monday morning, where Charles I was beheaded in 1649. We climbed up the same steps that he ascended to meet out parliament’s will and meet his own demise. Whitehall was the official residence of many Tudor and Stuart monarchs but the Banqueting Hall is all that survives in the present as the palace itself was burnt down in the 1680s. Although, at the time of James and Charles I, it would have been a fairly recent addition, having been built by James I in the 1620s. The great attraction of this hall, however was commissioned by Charles I in 1629 to celebrate the rule of his father, James I, and the magnificence of the Stuart rule and the Divine Right by which he ruled as King. The Rubens ceiling is filled with images of James as a ‘wise Solomon’ and ascending to heaven, of England, Scotland and Ireland becoming united and of good triumphing over evil in England.

Today we went to where King Charles I was beheaded, the Palace of Whitehall; well what remained of it after a massive fire in the 17th century. Thankfully what did remain was the awe inspiring Banquet Hall of the Stuarts. What kind of decor could befit the King and his fellows as they dined? Well the gods of course. 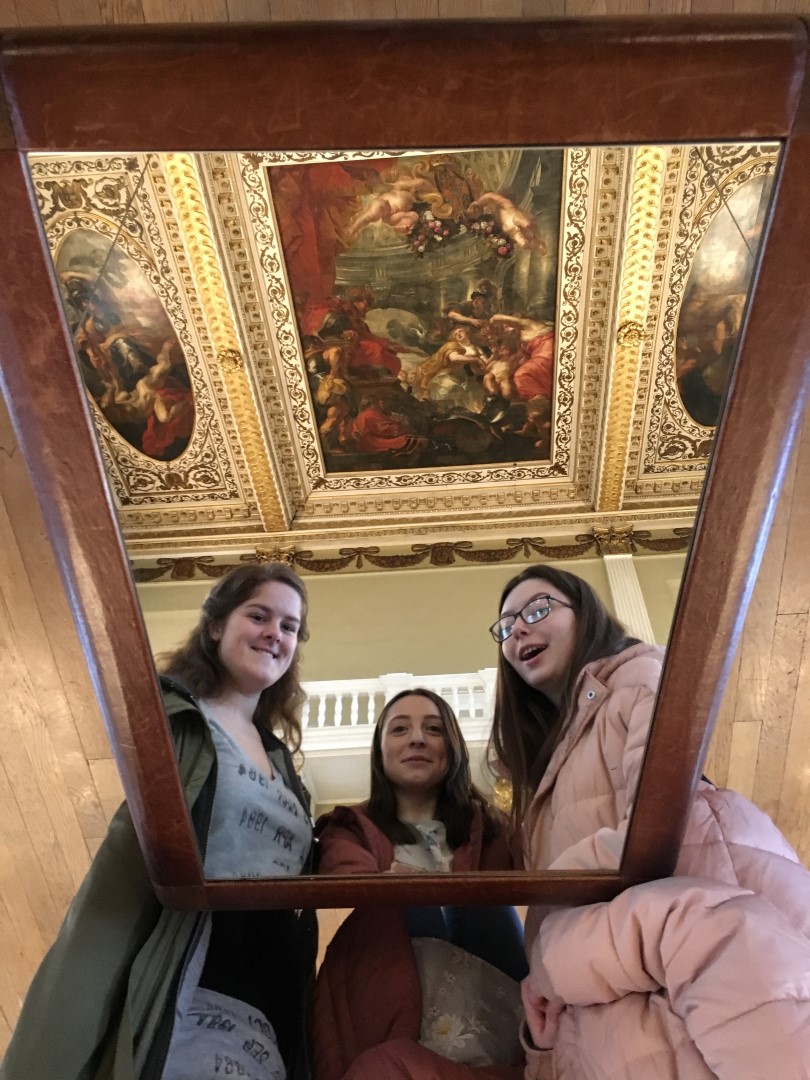 The ceilings, decorated by Rubens aka arty legend, basically hit you in the face as you enter. Comprising of nine sections bordered with carved gold (well wood covered in gold but same difference) each painting bursts with detail and is all a bit extra. The major theme is 'how bad was it before the Kings' and therefore 'look at the beautiful peace brought by the Crown'. This idea is portrayed through depictions of the juxtaposition between man shown in drab beige and dark shades and the sun soaked godly beings like Hercules quashing the evil figure of rebellion and discord. Amongst these godly figures,  Kings like James I stand centre stage as he is raised to heaven. This praised his reign and the divine right of Kings. 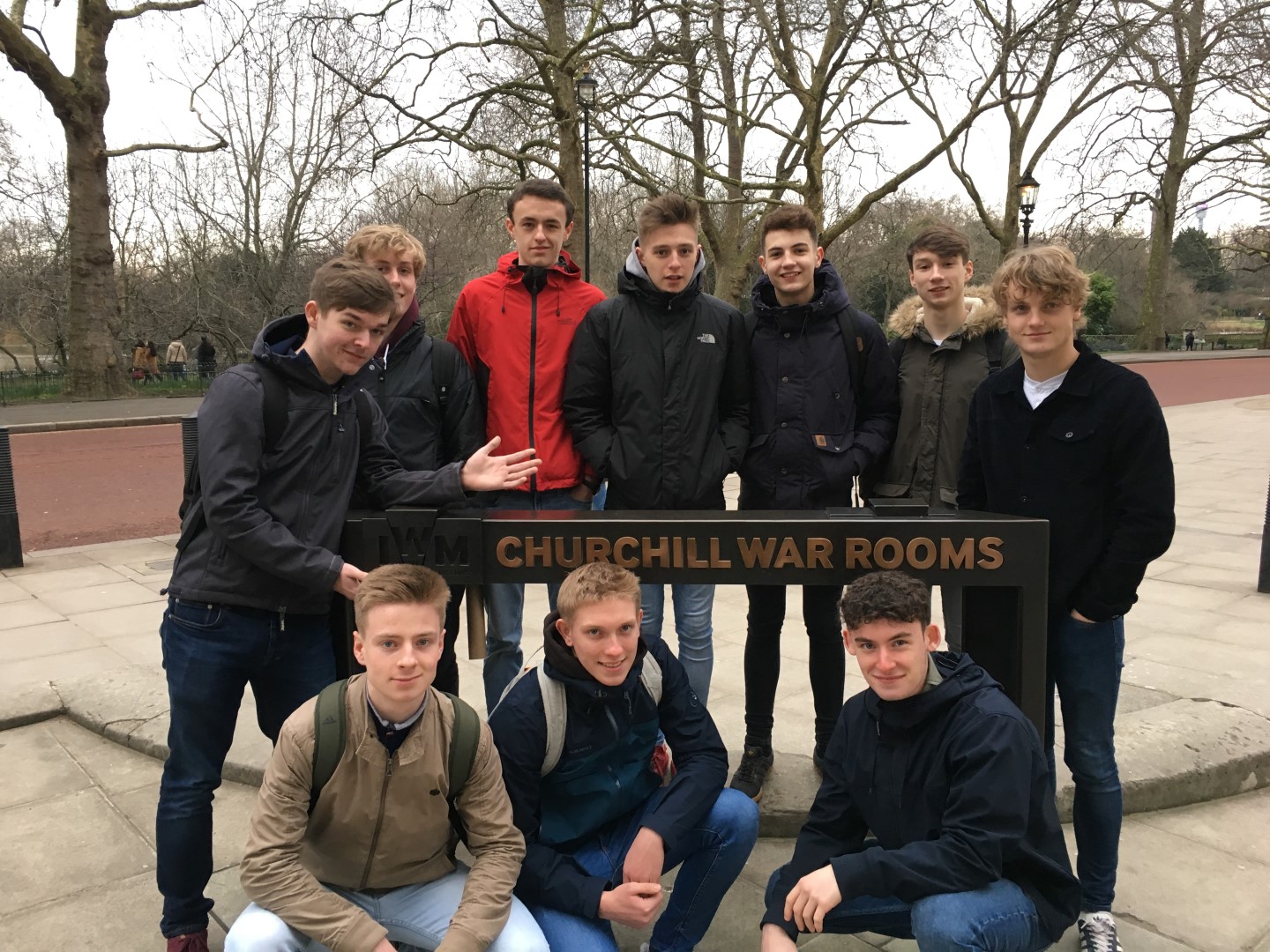 This afternoon we went to the Churchill War Rooms. After a short video introduction we used an audio information guide to tour and learn about the war rooms, what they were used for and who occupied them. I found this well structured and easy to follow. 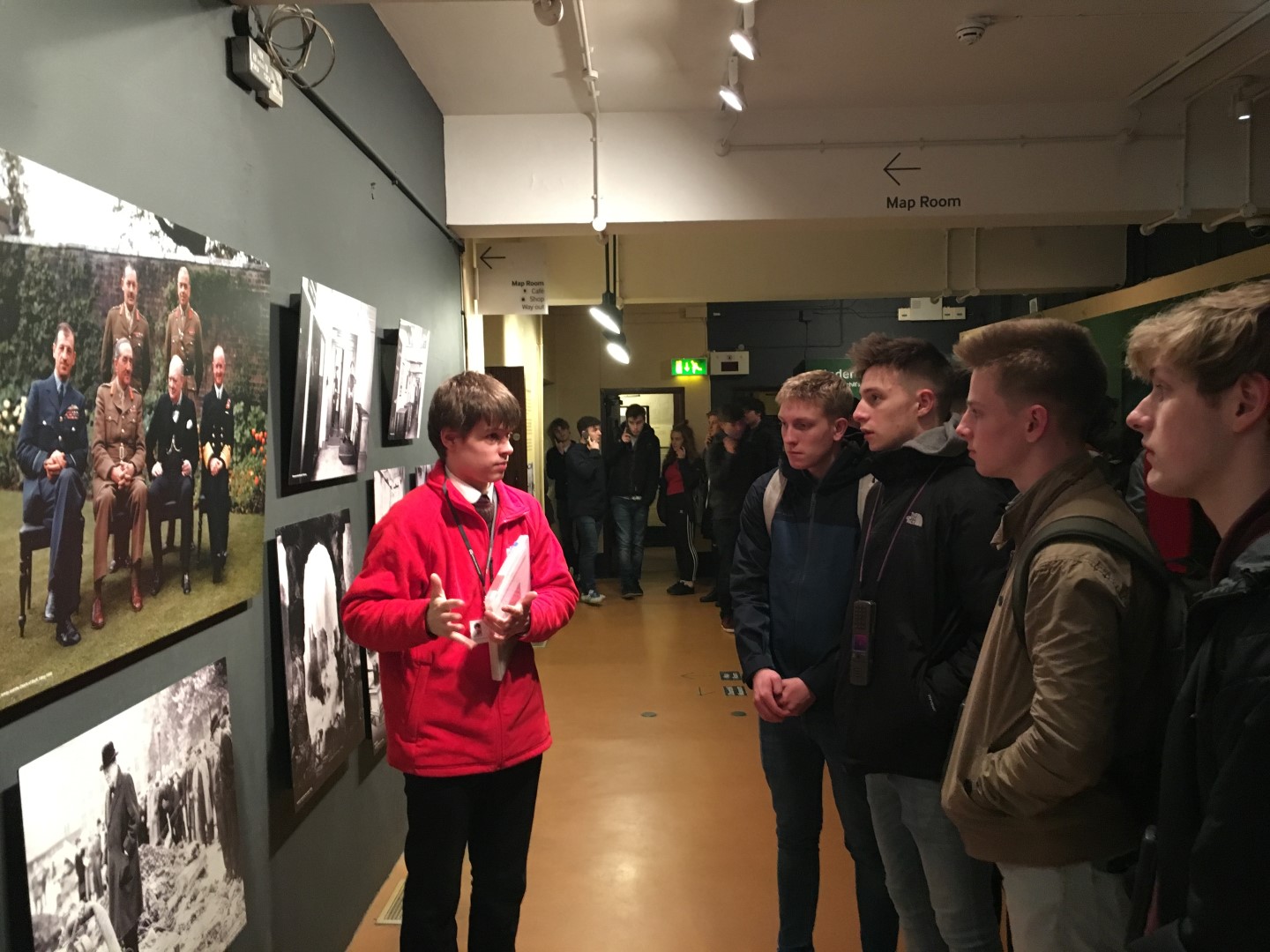 After touring half the rooms, we went through the huge Churchill's life exhibition, which explained everything from his early life, to his involvement in the Cold War. There were his old uniforms, medals, and diaries, along with old political cartoons and interactive displays. It was very interesting and informative, leaving no details out. We then finished the second half of the War Rooms tour and had a browse of the gift shop, which was somewhat overpriced. 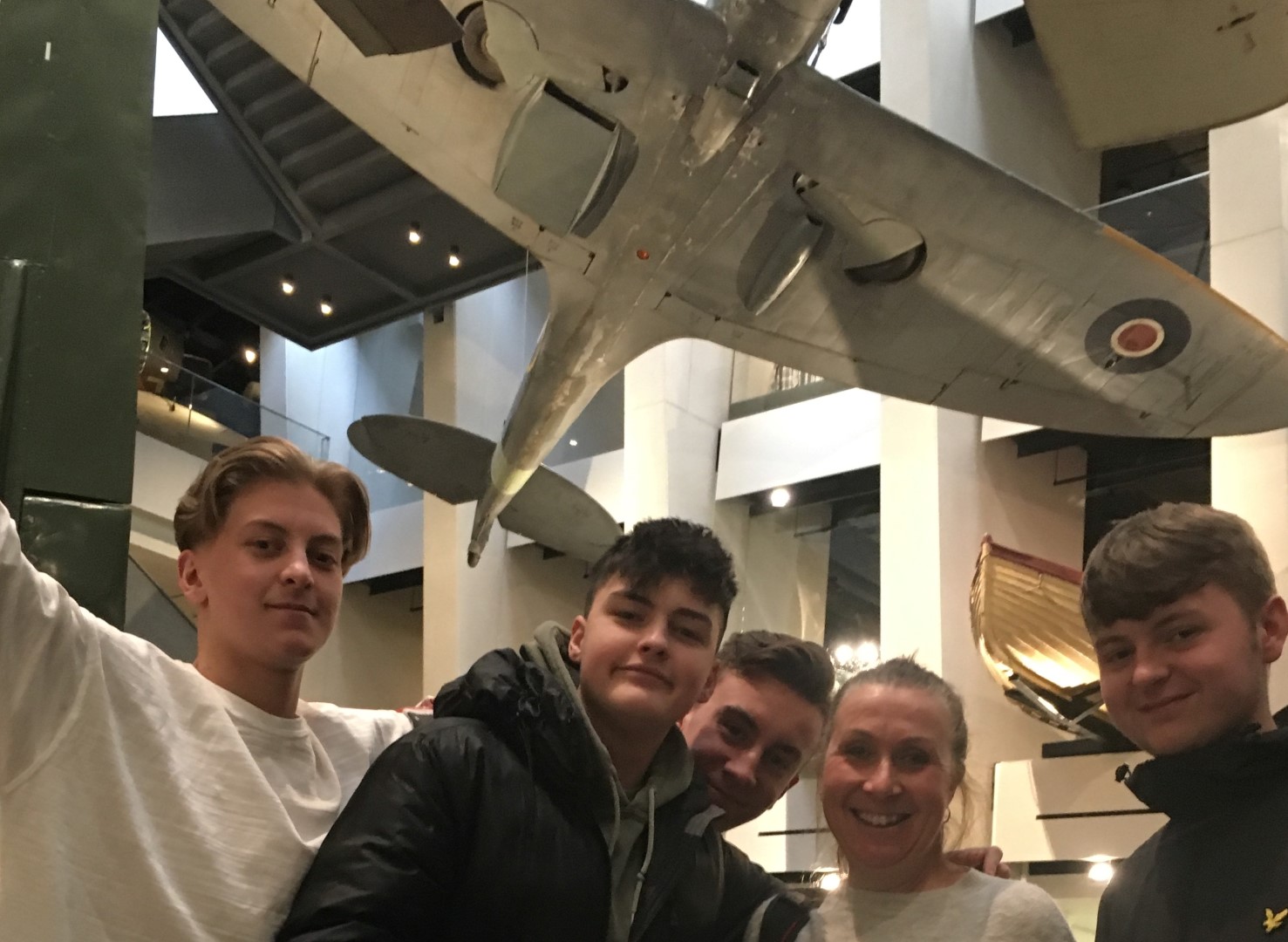 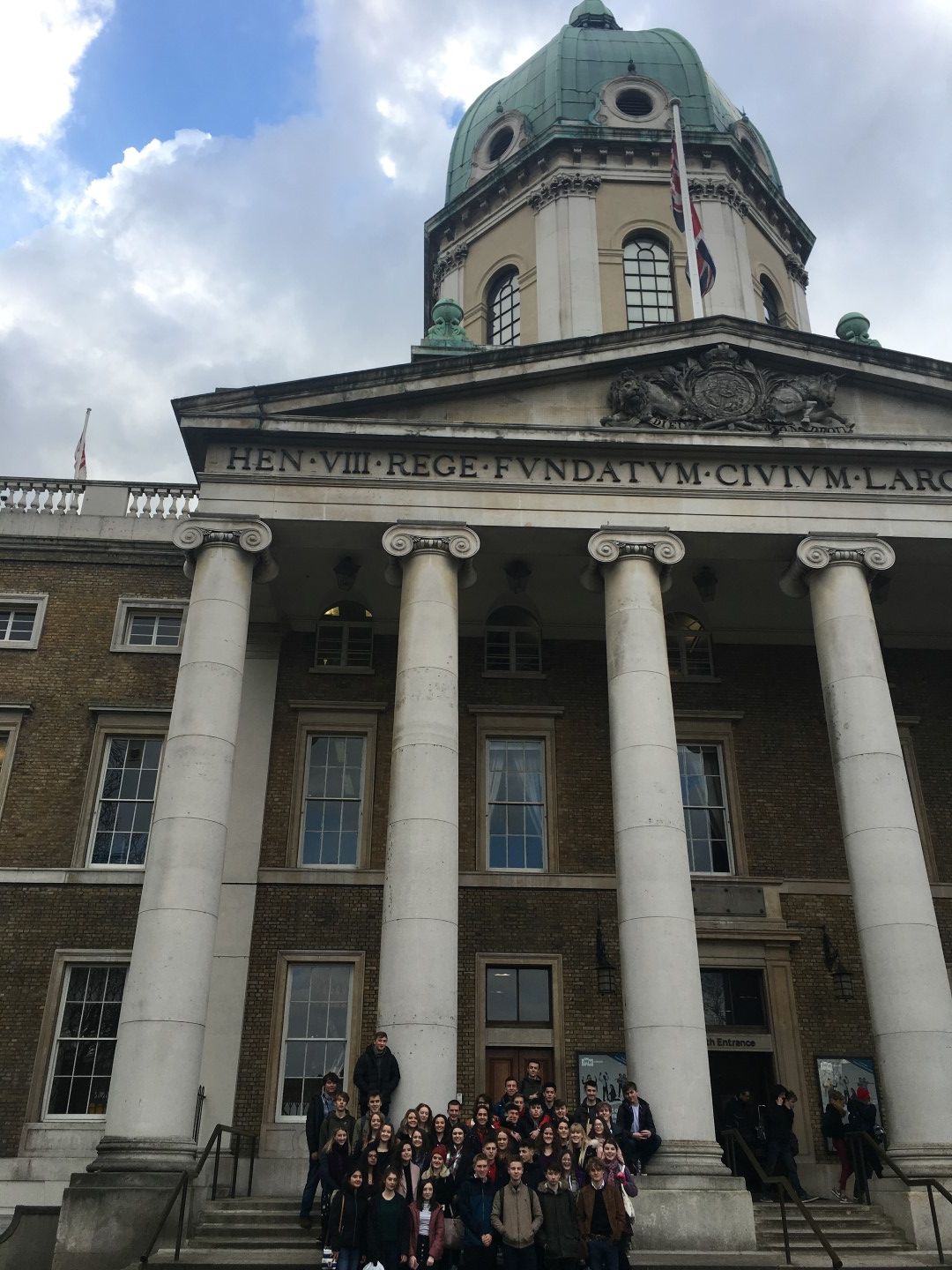 we walked to the Imperial War Museum, an imposing building containing everything from Spitfires and Harrier Jump Jets, to medals and propaganda posters. These were all very impressive and gave a real sense of the engineering and bravery put into past and current conflicts. The most harrowing part of the museum was the Holocaust exhibition. This contained a vast array of documents, video footage and artwork. Put together, they showed to us the horrific acts of the Holocaust carried out by the Nazis. The museum is definitely worth a revisit. 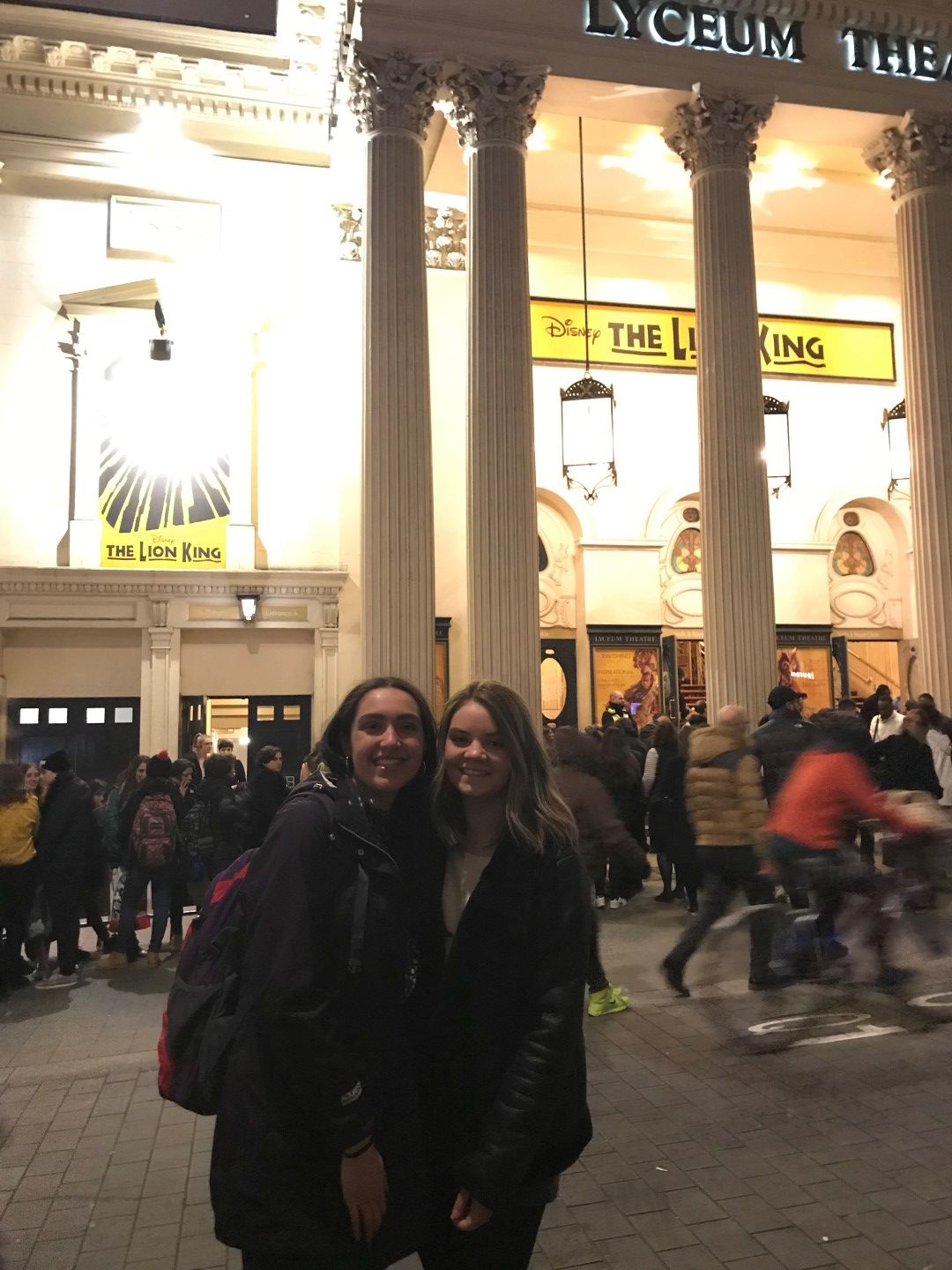 Let’s set the scene. Seats U1 and U2, the three minute call sounds overhead, and the lights start to dim. Everyone quietens down as the first note of the musical echoes throughout the Lyceum Theatre.... ‘Nants ingonyama bagithi Baba!’

This two time Olivier Award-winning musical kicks off to an amazing chorus of singers as the aisles fill with dancers dressed as an array of African animals - elephants, lions, antelope, you name it. The first act of the musical focuses primarily on young Simba finding his strength and battling with the death if his father, Mufasa. The sass and the talent of young Nala and Simba emulate the raw brilliance of this musical. Young Simba’s amazing performance ended with the final song of the first half: Hakuna Matata. 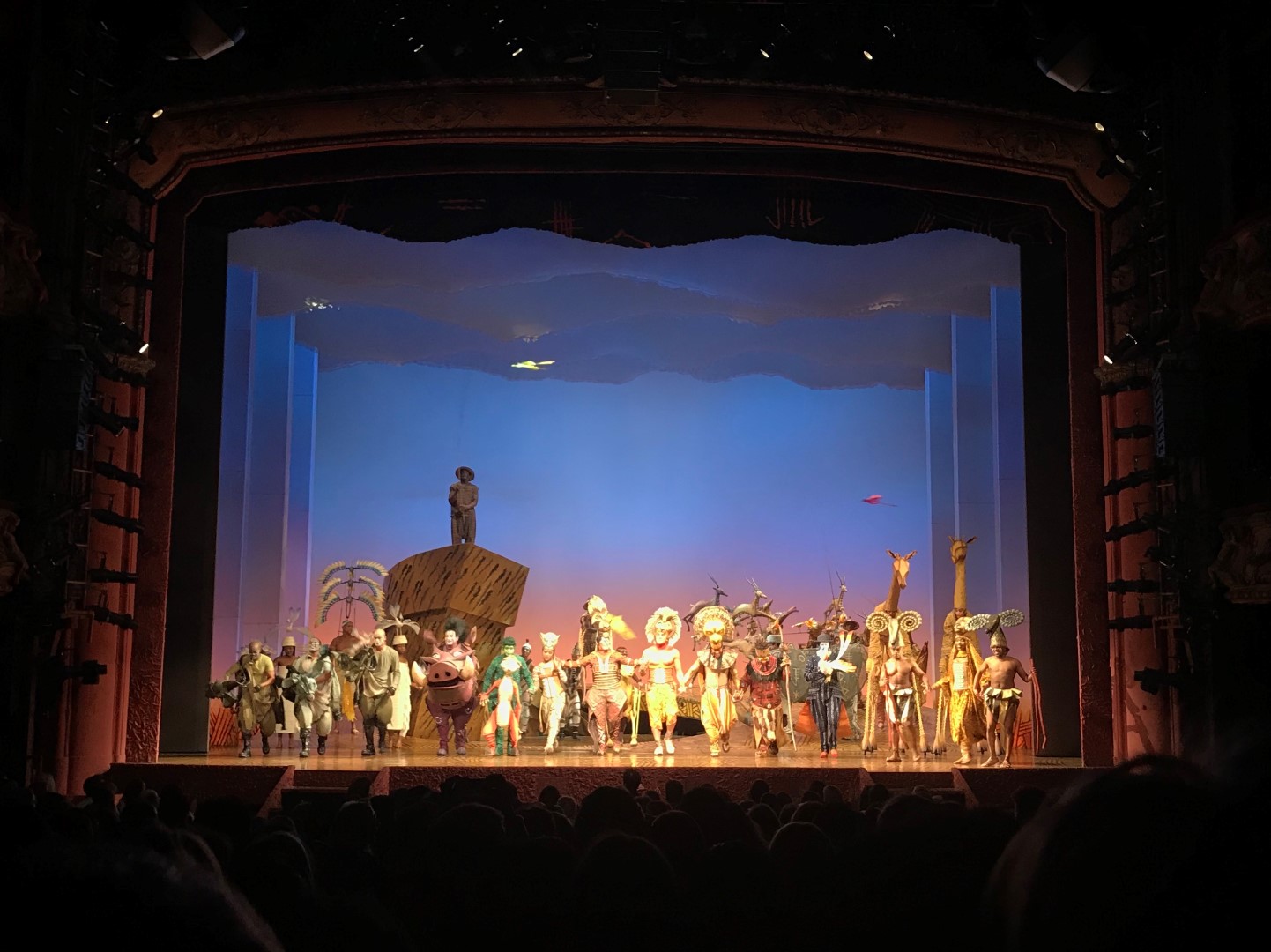 The second half was set several years on and begins when Nala finds Simba and persuades him to return to Pride Rock and challenge Scar, his uncle, for the kingdom.  After a moving reprise of “He lives in you” by Simba and Rafiki - one of our favourites - Simba sets off on his journey to reclaim his place as king. Several amazing dance-fight routines later and Simba emerged victorious. This incredible musical ended with the song “Circle of Life” again as Simba and Nala - now King and Queen - stood, surrounded by animals, and presented their new lion cub alongside Rafiki. A fitting cyclical finale to this amazing show. 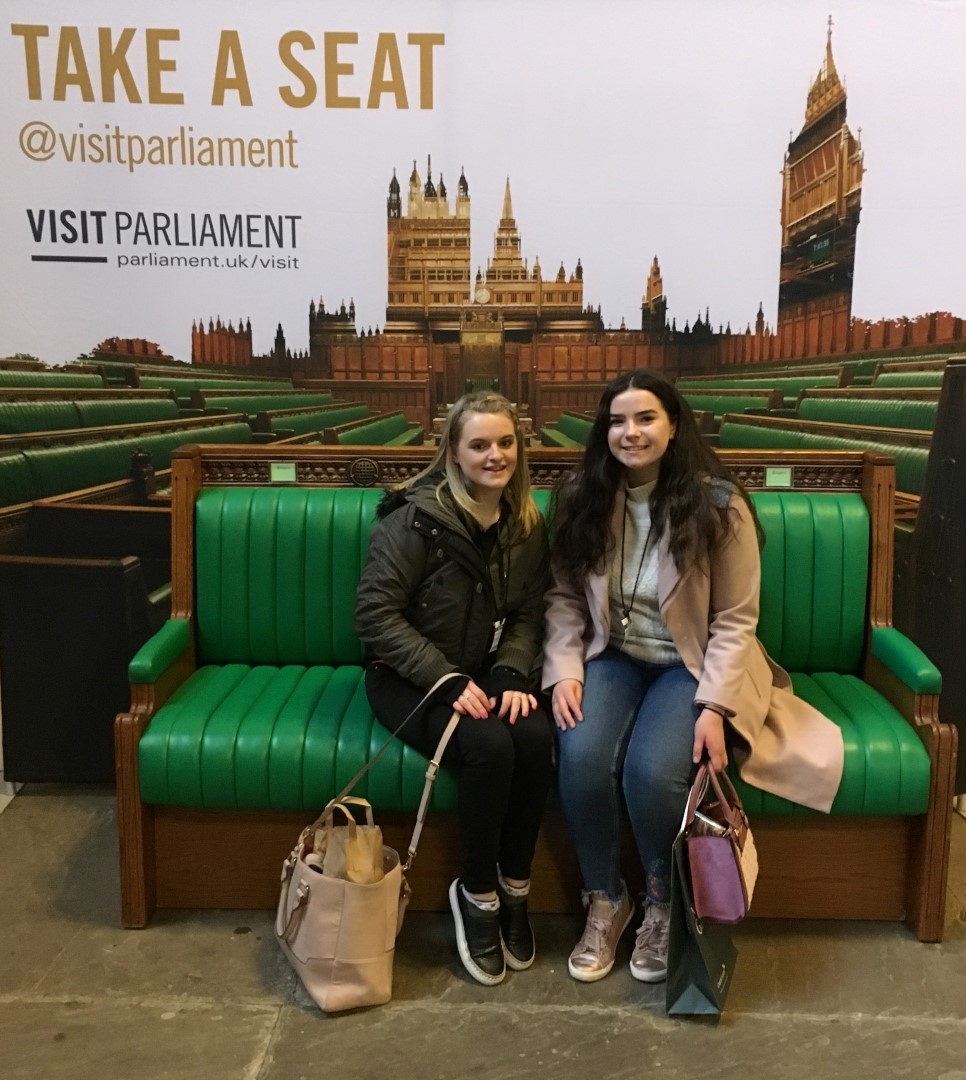 This morning we visited the Houses of Parliament. On entering Westminster Hall we were greeted by our tour guide, Allie. In relation to our Stuarts course, we discovered that Charles I's trial, which found him guilty of treason, took place in the hall. It was incredible to stand in a building that is so relevant to the end of Charles' reign . In the House of Commons, we were told the history behind the tradition of slamming the Commons door on the Monarch's representative; During Charles' reign, he attempted to arrest 5 MPs there. This resulted in no Monarch ever being allowed to set foot in the House again and it symbolised the independence of the Commons. To end our tour, we visited the House of Lords, and like in the house of Commons we were unable to sit due to a tradition that only members of parliament are allowed to sit on the seats. And finally we passed through St Stephen's Hall which used to be the House of Commons but was burnt down and rebuilt after a fire in parliament. For us, one of the highlights of the tour was the exquisite interior design and detailed artworks in each room. 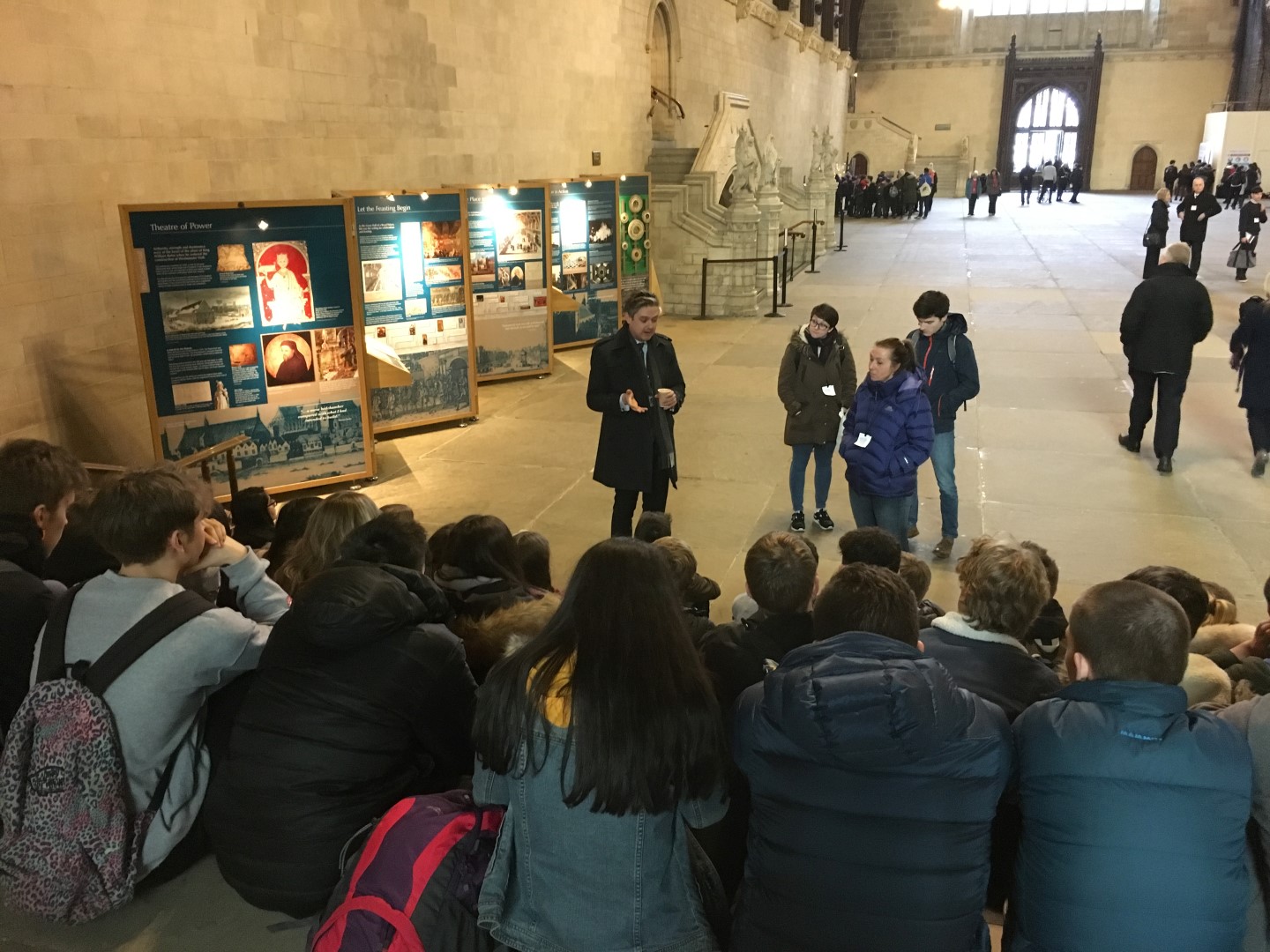 After our tour, we were lucky enough to speak with John Woodcock and hear his opinions on political matters, as well as him telling us about his life as a Member of Parliament.