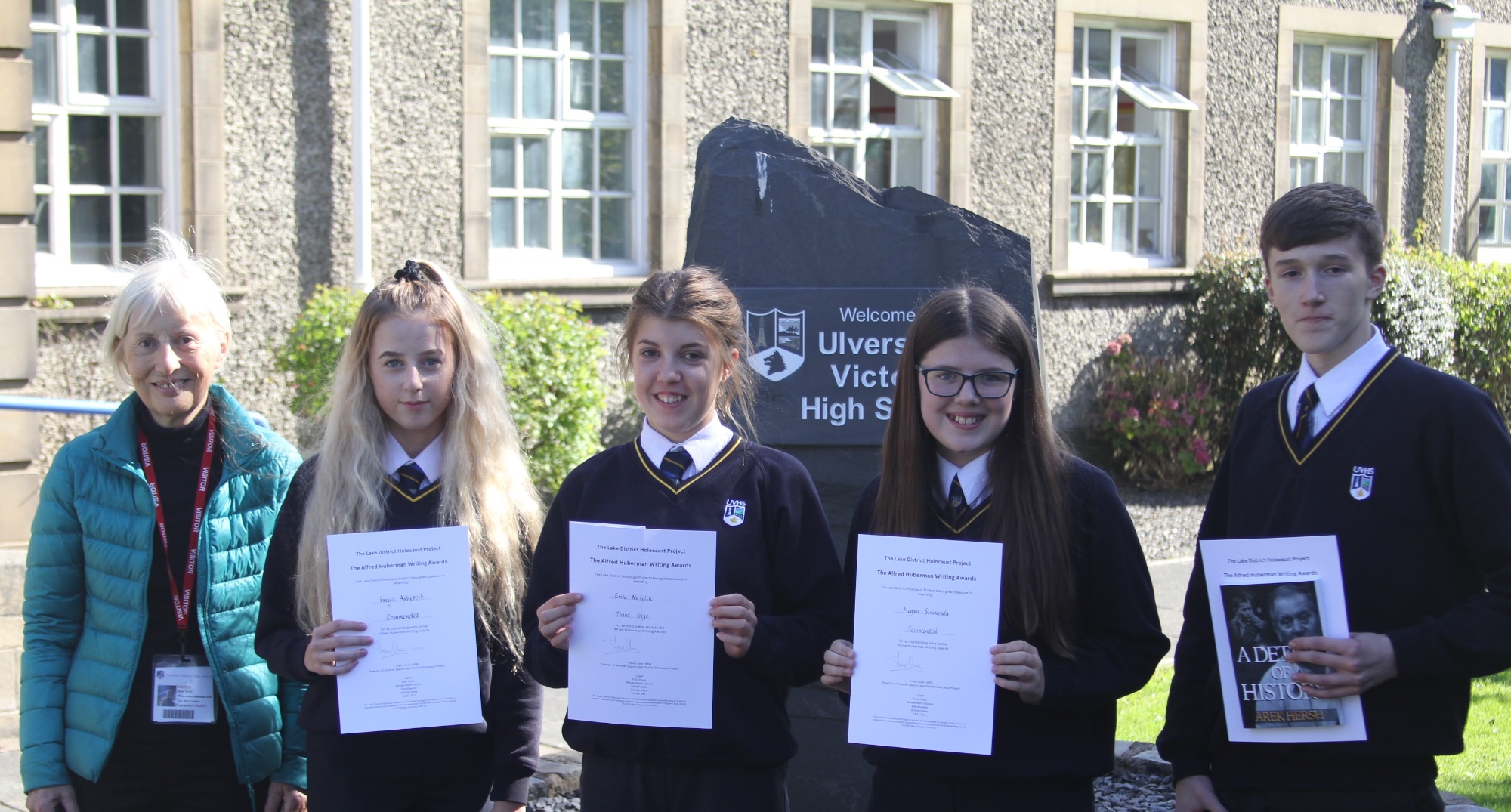 This writing competition had 500 entries and was judged by three independent judges, including representatives from the Huberman family.  Four UVHS pupils have done exceptionally well and were highly praised by the judges:

Erica – Third prize.
Judge: This was the standout piece from all the other diary entries. The vividness did it. You’re transported directly into the situation, and most importantly, the writing never gets in the way. You don’t notice the writing; you are simply there. ‘Invisible’ writing is incredibly hard to do, but Erica manages it here. The narrative is everything. And this despite the fact that the piece is about the act of writing a diary, and the consequences of such an action, as becomes clear in the second half. Completely absorbing writing.

I woke to the sound of violent coughing. It was coming from the beds behind. The stench of starved, dismortled bodies filled the air. I wondered how many we had lost tonight. When would it be my turn? The sound of gasping breaths rung in my ears. Those alive, frantically trying to find air in this dark place. I rolled over to my left, struggling to move, only to discover the first of many who did not survive the night. The cold icy air from the doorway danced through the room making it tremble. The constant noise of moans and coughs from the waning dead was suffocating. I swung my legs around the collapsing bed frame, noticing quite how thin my legs were. I once had strong legs. I took pride in them and their golden glow, toned calves and big hamstrings. But now... they were frail, barely coping. I wondered how long it would be until they gave up on me, and no longer supported the little weight I had. Every day I was half expecting them to snap like a twig. But no. Not yet. They will carry on, just like I, myself have to.

This notepad and pencil is all I have. It is funny how your priorities change in such a place as this. I am, however, certainly not allowed these. I just wait for the day they will find the pad and pencil…and kill me. But for now, I keep on living. That is, if you can call this living. Everyone in here has the same drive to fight. Most of me prays that the night will take me as its victim next. But just a small part of me has hope. Maybe, just maybe, one day I will make it out alive.

Daniel – Highly Commended
Judge: “Most of the entries in this competition were diaries, memoirs, historical analyses, short stories and poems. Just one piece of philosophy that knocked me sideways, and this was it. Daniel has taken death as his theme and his piece is a mature and thoughtful exploration of the concept of death. The originality of the ideas is staggering. An exceptional and unexpected piece of work, and unlike anything else in the entire competition.”

During the weeks in which we discussed the topic of the Holocaust, I learned a lot about the concept of death.

If you close just one eye, it is nothing like as though you were closing both eyes. When you close only one eye, you still see colours or light through it. All you see is nothing and only nothing. Now try to imagine the idea of seeing nothing through both eyes. It would be the same as trying to see what is behind you without turning your head and seeing it. Now imagine seeing nothing forever. Or for never as well I suppose because you are in a state in which nothing changes and therefore time is meaningless. However, you also cannot imagine anything because you are not conscious. There is no thinking or time. There is just nothing.

That is most likely what death is like. It’s just nothing and it keeps on being nothing forever. You don’t even experience it because you’re dead. This idea of death made me think about this topic (the holocaust) because every single individual who died without reason will be forever stuck in this state for no amount of time until the end of time. Considering the fact that the vast majority of the people who died were Jewish, I would think that they may believe in something about death like a lot of other religions. Even then it is still completely unknown. The most horrifying thing though is that a lot of the victims did not have the opportunity to live their lives to the fullest.

Even worse, some were forgotten.

I am sure that it is a fear of many to be forgotten completely after their inevitable death. If you leave nothing behind for people to remember you by, you would disappear and become part of the dust.

This applies to the victims of the Holocaust a lot. Thousands of people are forgotten, not because they left nothing to be remembered by but rather that they were genetically erased and have no one to remember them by. Instead, those who did survive must act as living reminders of the event. As a way for us not to forget.

These people will not be here for much longer. I must consider myself and those like me very lucky to be the last generation to have a physical connection with these events before they become nothing but history that is only known by book or film.

After that, there simply will not be any connection. It becomes just another thing that happened. Forever

Megan – Commended
Judge: “What I wanted to see here was a greater originality of thought, and also, stylistically, a considered realisation that over-writing can be a problem.
There were many deeply poignant short stories in which the writers imagined themselves as victims of the Holocaust, as well as a set of well-argued pieces that took the historical perspective to discuss why it is so important to remember what happened. Writing about such traumatic events is never easy. Some of the writing was quietly, and subtly horrifying, and that was more often more effective than graphic descriptions.”

We all stood by the gates, like any other day. The dull, listless sky, much like us, showed no sign of brightening up. The sun was the only thing we had faith in now, but even that was starting to fail us. The colder months grew nearer every day. The temperature was dropping rapidly, and more bodies lay frozen on the floor. I could feel myself getting weaker. I no longer had feeling of my toes and fingertips. It seemed the only thing I could do was wait for my time. More and more of us were disappearing into the huts that were just on the horizon. We weren’t stupid. We knew they were walking straight to their deaths.

My hands, cut and shredded due to the days clinging onto the barbed wire fence, were raw and sore. I looked along the inhumane cage. Every person was as bad as the last. We hadn’t seen any Nazi soldiers for weeks. No beatings, no marches, no treacherous labour. We were neglected dogs, forgotten and uncared for. Something was going on. They would never leave us alone this long. In the distance, crows cowed and squawked, as sign of death to many. Trees bustled and whispered in the wind, knowing things we didn’t. A giant humming noise in the distance caught my attention. I had never heard anything like this before. At first, it was barely audible, but after time, it seemed as though it was getting louder. Everyone around me had heard it as well and looked into the long line of trees. It was getting closer. We didn’t know how to react. We didn’t know what it was; it could be the camp leaders or a heroic saviour coming to rescue us all from this man-made hell. All of a sudden, voices could be heard, shouting and ordering others in a foreign language we didn’t quite know. We all knew the same thing – we were found!

Huge trucks emerged from a small road-like clearing through the thick blanket of trees. All of the others stumbled out of their huts to see what all the noise was. Many collapsed onto the floor. Men poured from the trucks intrigued to see what we were. Some of the younger men looked scared. I didn’t blame them. It wasn’t like we looked human. Our eyes were sunken into our sockets, out skin stretched over our brittle bones, out clothes (if you even call them that), ripped and tattered, hung from our bodies like rags. We looked like the very monsters we were described as.

I couldn’t understand what they were saying. They looked and pointed at us a lot. One young man walked towards me. He observed me intensely, and his expression softened, saddened. He said something to the others and looked back at me. He reached his hand through the tangle of wire. I grasped onto it desperately. I realised, at that moment, I had faith in him, he was my sun.

It’s the next day and I’m one more step closer to my grave. My throat is dry and words are choking me. I’m weak and I don’t know if I’m able to walk anymore. My name is 356721 and it’s tattooed on my wrist. We have been told to separate into different lines. Rich, poor, elderly, young, we all looked the same. Identical haircuts, striped jacket, striped pants, striped cap and wooden shoes. I have been told to go into the group on the right, I was joined with middle aged men, women and teenagers. On the left there are the elderly, disabled, children and mothers with babies. A woman has refused to leave her baby, there are tears streaming down her face. A guard got angry and shot the baby in the head. Why has this world turned so cruel? She is not a mother anymore, her child is dead. It is sickening that this has become allowed. It’s as if the worlds human rights are meaningless.