UVHS Wind Band with The Band of Her Majesty's Royal Marines 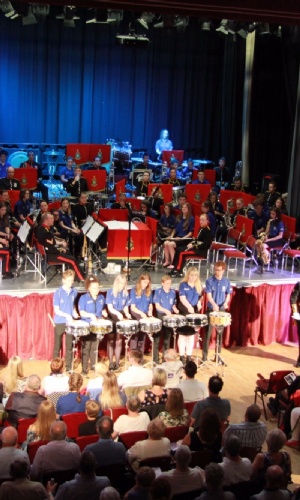 We have been very privileged, in fact for the ninth time, for The Band of Her Majesty’s Royal Marines to join the UVHS Wind Band in May for an evening of music and entertainment.

Playing to a very hot and packed house, the UVHS Wind Band opened the proceedings with The Blues Brothers Revue and saw the debut of the new tuba, very generously bought for us by Phoenix Business Centre and Stollers Furniture World and played by Francis Smith-Ward. Also joining the band on stage were two former UVHS students, Musician Jodie Giles (oboe) and Sergeant Andy Spain (sax).

Our cornet soloists David Griffiths and Anna Merrell then took centre stage, giving a fantastic duet performance (accompanied by the band) of Mr Butler’s arrangement of She’s Out Of My Life. The band were later joined on stage by Royal Marine Musician, and ex UVHS pupil, Ruth Wardle (who is now the principal violinist for the Marines Band Service), who played solo with the Wind Band performing the very moving violin solo, Schindler’s List.
After a quick change around, the Royal Marines took the limelight to showcase their amazing talents. Her Majesty’s Band were joined front of stage by the world-famous Corps of Drums to dazzle us with their legendary skills. Ex pupils, Sergeant Musicians Andy Spain and Musician Robert Norrie (trumpet) also gave phenomenal solo performances, emphasizing why the Marines are the best Concert Band in the world.

The final third of the evening saw the senior members of the UVHS Wind Band join the Royal Marines on stage under the baton of Captain Matt Weites, a great opportunity and experience for our students. The music ranged from traditional military themes to the music of the film How to Train Your Dragon,Bach’s Toccata and the jazz spectacle Sing, Sing, Sing. The highlight of the combined band, however, was the joint drum feature, where our very own Percussion Ensemble gave the Marines Corps of Drums a run for their money in a ‘drum-off’.

The evening was a great success and we hope to be able to welcome back the Royal Marines in the near future.