Students from Y9 are currently in Belgium for the History and English Great War Battlefields trip.  After departing early on Sunday 15th October we are expecting them to return late Wednesday 18th October.

We would like to keep you posted about the trip with updates from the students.

Today we went to lots of different memorials remembering the tragedy of the Somme. This included: the Newfoundlanders’ memorial at Beaumont-Hamel, the Lochnager Crater, the Ulster Memorial and the Thiepval Memorial. All of these were very interesting and we learnt a lot from these excellent experiences. The crater was very impressive as it was so deep and wide; it was hard to believe that a mine could make that large hole. It was interesting to look at all the different names on the Thiepval Memorial and it showed us the true number of how many people died whose bodies were never found. The Newfoundlanders’ Memorial was very impressive with the all the trenches and the “Danger Tree” in No Man’s land; this was the furthest point that the Newfoundlanders reached on their attack. Today we also went to the Somme Museum in Albert. This was very educational and it was fun to look at the artefacts that were used in The First World War and the Somme. We also met some people from Albert Twinning Committee. This was good because it showed us the point of having a twin town (Ulverston being twinned with Albert). I think today has been the best day in the trip so far. 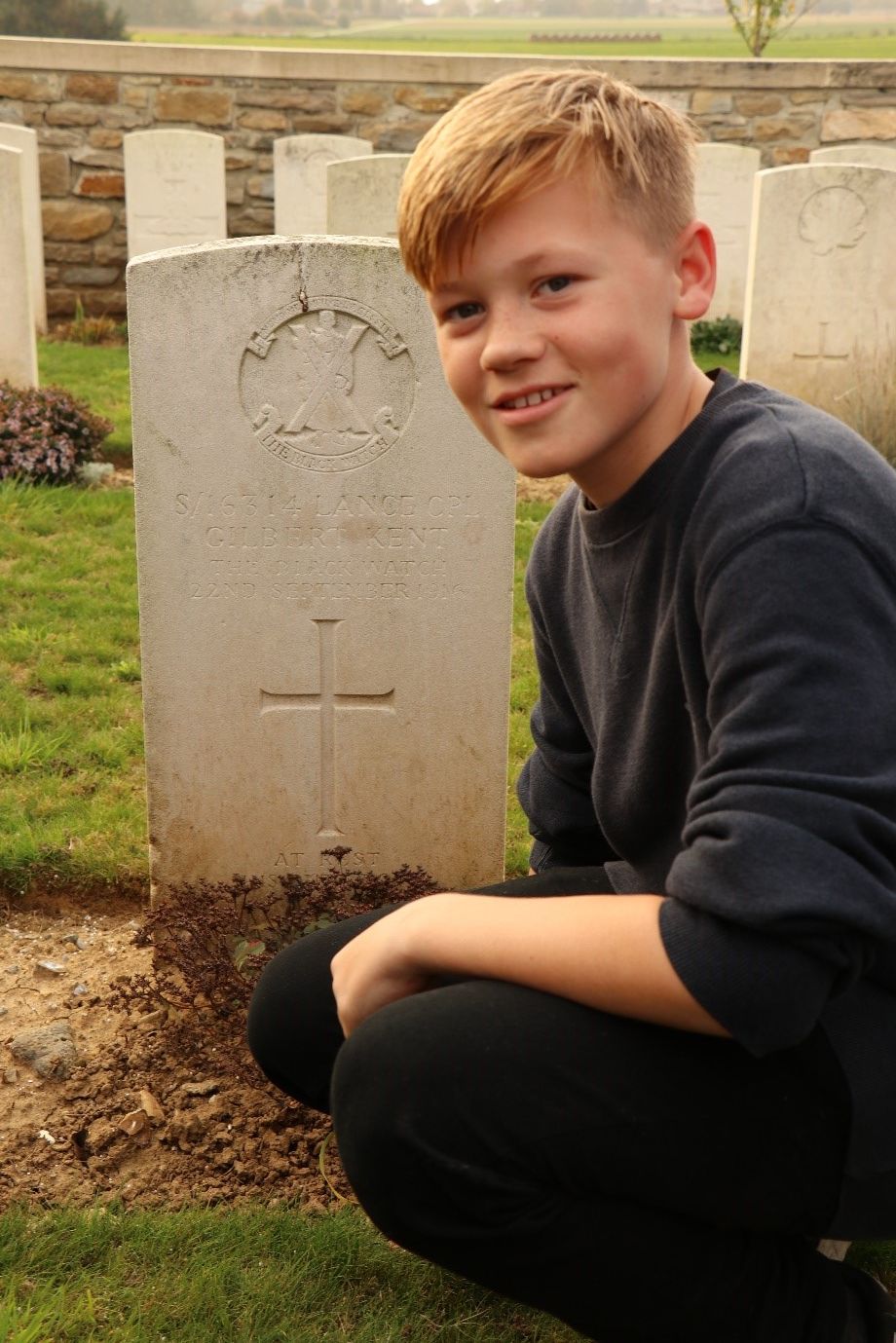 Today was filled with a set of emotions: joy, happiness and most of all pride…

Seeing my Great, Great Uncle Gilbert Kent was astonishing; it was like I could feel his presence and it very nearly made me cry. But then I thought, what a brave person he was, fighting for his country. I felt everything for him, for his family, well for my family.

Seeing everyone around me, well at first it made me feel awkward but then I felt privileged. I will always remember Gilbert Kent as a hero, a warrior and most of all my family. 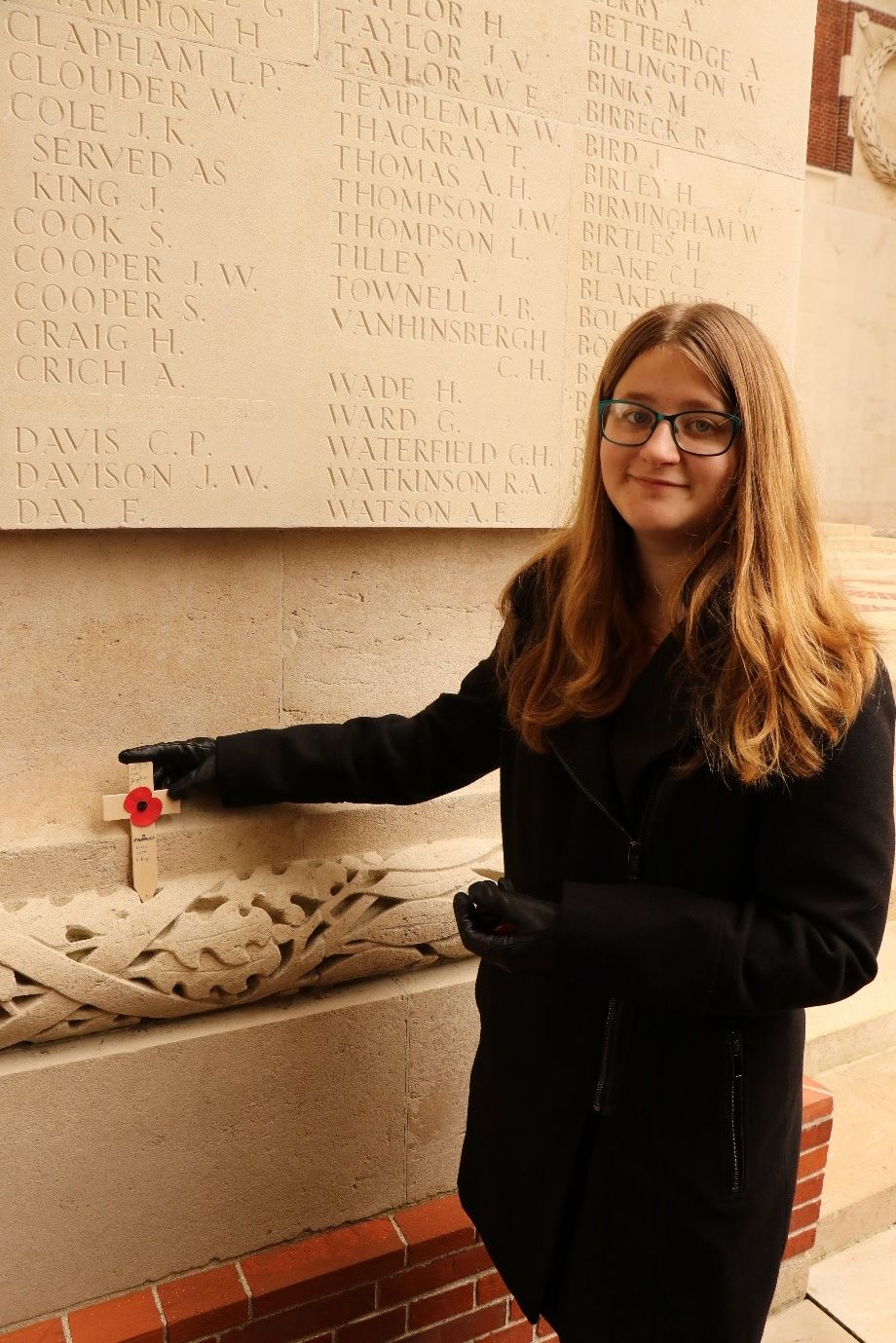 Today at Thiepval was overwhelming, especially seeing the number of missing bodies. I felt particularly emotional when I found a space in the wall where a body had been found, identified and the name had then been removed from the memorial to the missing. It was by far the most moving place on the trip so far. I was so honoured to lay a cross on behalf of school for one of our old students who died in the First World War, Alfred King. 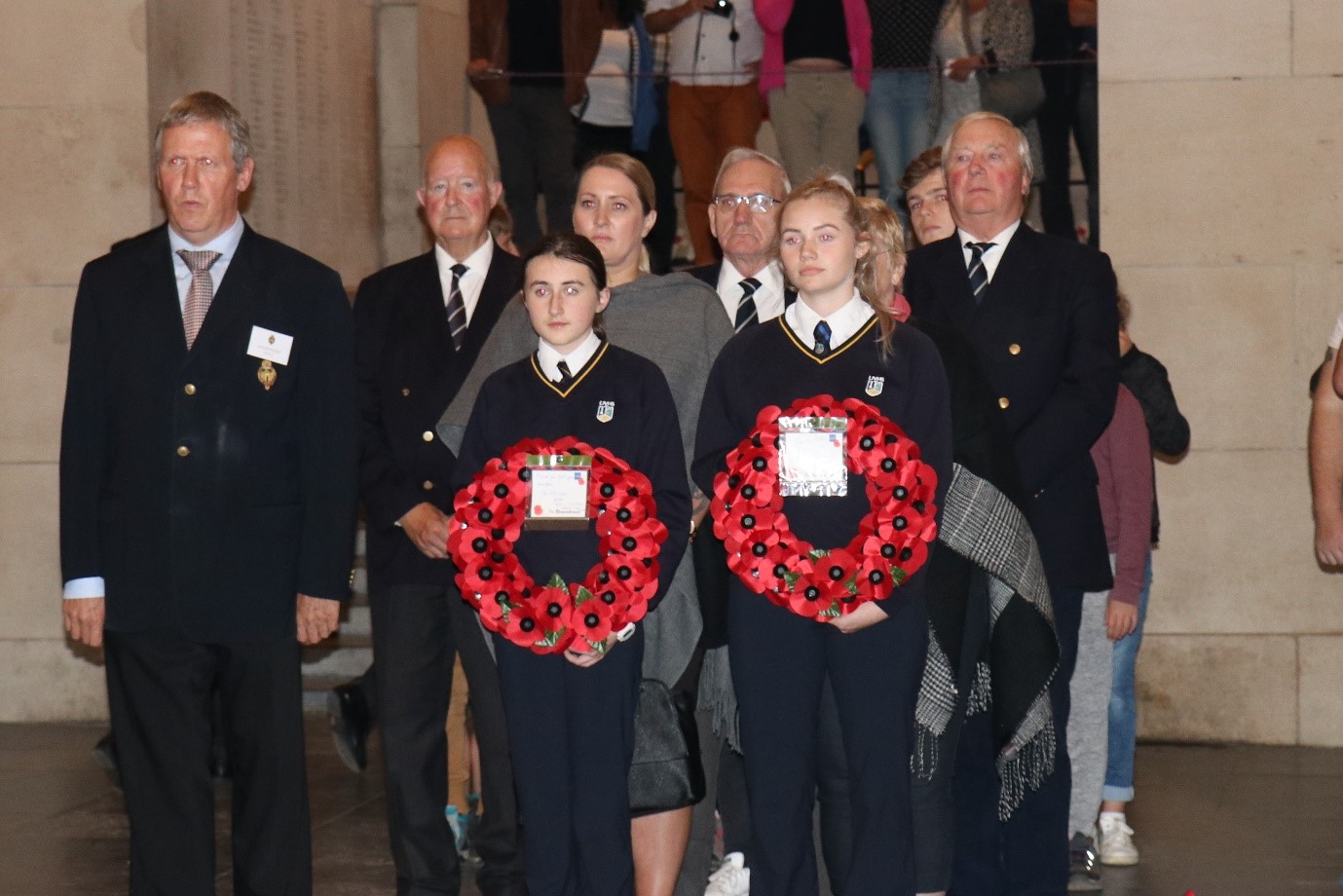 Zoe and I were lucky enough to represent school by placing a wreath at the Menin Gate. The sheer number of names on the memorial is astounding and thinking that some of them wouldn’t have been that old and their life is over at that young an age makes me appreciate my life more. It was very emotional and it did make me feel appreciative and saddened. I am very grateful for their sacrifice but every one of them had their own loved ones that never got to see them again. I felt so honoured to place that wreath and feel like I have said thank you; but I do know one “thank you” will never be enough. 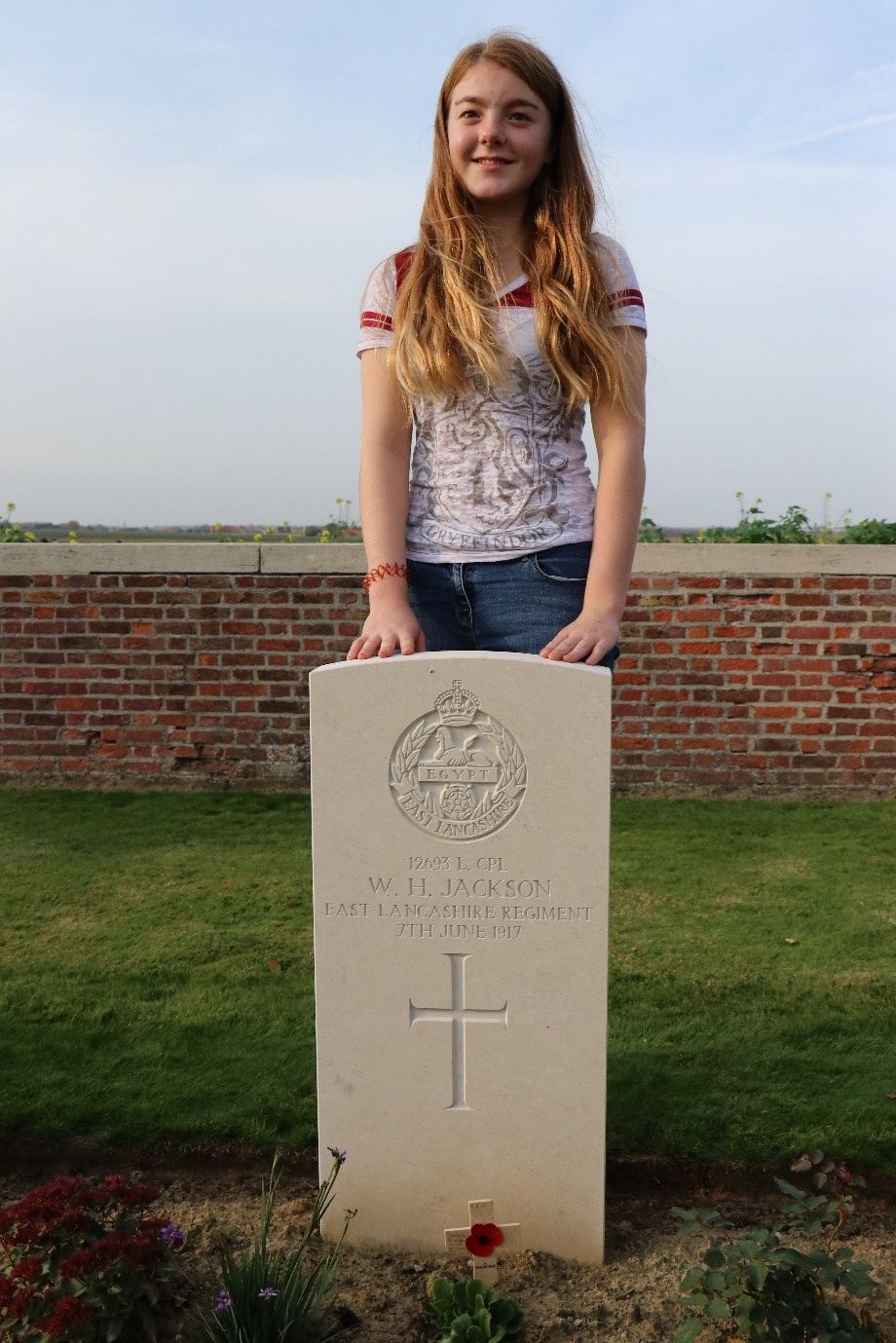 Today I was fortunate enough to be able visit a family grave. My great, great grandad was a soldier in the Great War and unfortunately died serving in the army. He is buried in La Clytte Cemetery and we managed to find his grave. It was very sobering to see not just my relative’s grave but all of the other soldiers who laid down their lives to protect us .It makes me realise that people weren’t just fighting for their country but for friends and family they would never see again but died to protect. I am very grateful not just for seeing it myself but for my grandad who has never been able to come himself who can now find peace in knowing his grandad hasn’t been forgotten or abandoned. I will always remember this experience. 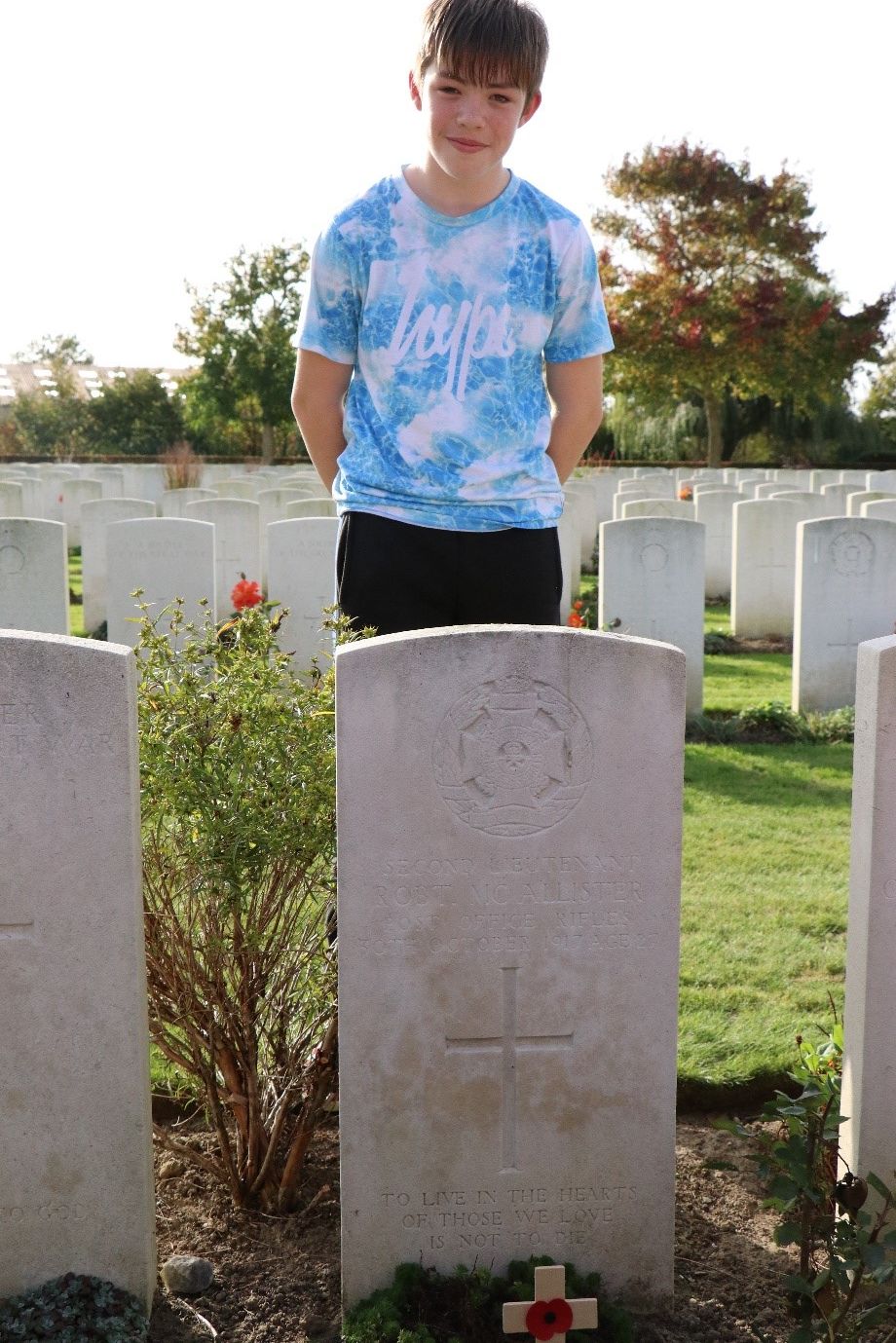 Today I got to meet a distant relative who was my great, great grandma’s cousin, Robert McAllister. At his grave I paid my respects by placing a remembrance cross and taking a photograph to share with my family. It was great to know that my family fought in the war and helped Britain to victory. Sadly he lost his life, but the role he played was a dangerous one as the average man in that position lived on for 6 weeks once they got to the front line. 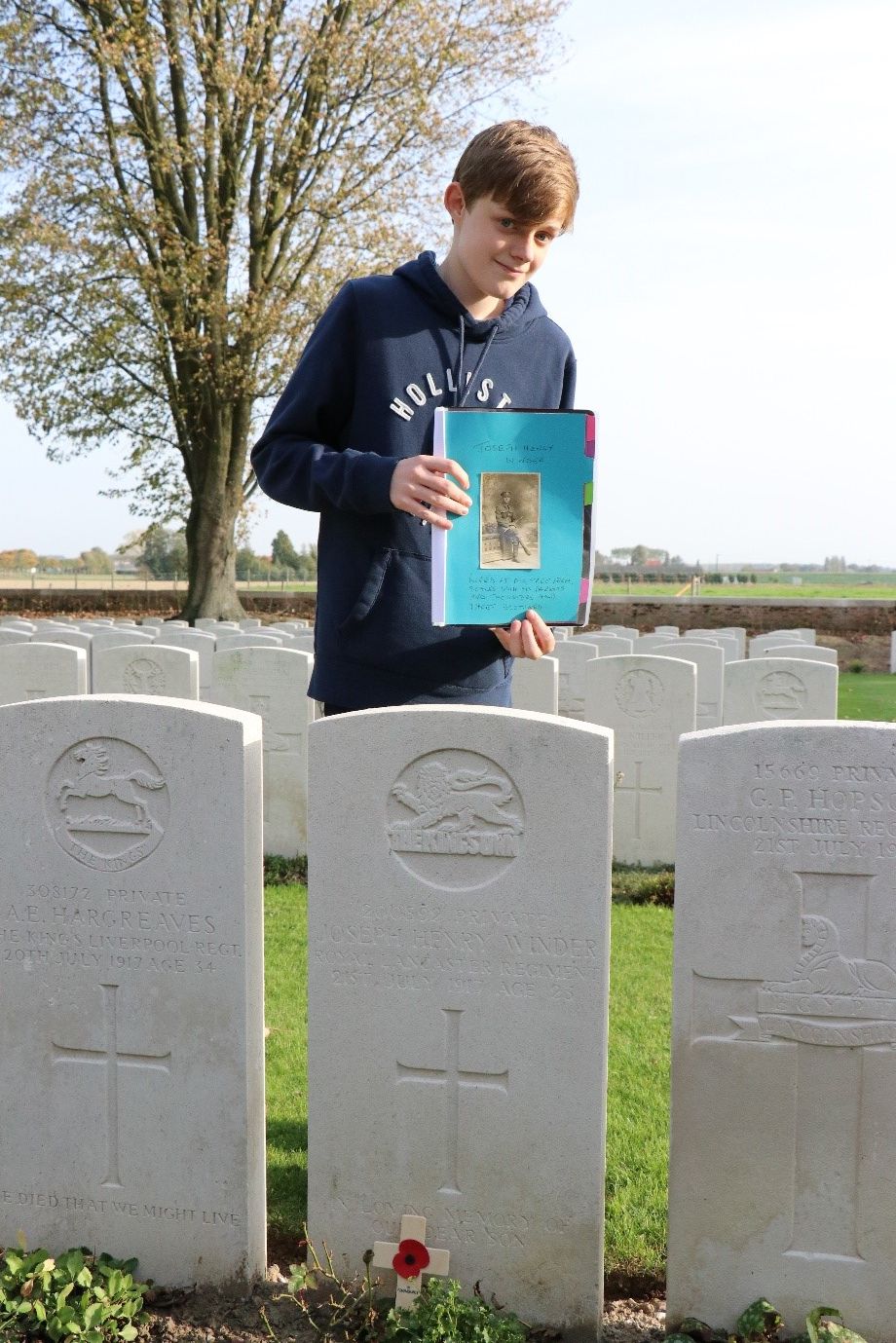 Today I visited the grave of my Great Great Uncle Joseph Henry Winder. It is amazing to think that my relative, who had died one hundred years earlier, lay under where I was standing. I got to place a poppy on his grave and I will be able to tell my Great Grandma, his niece, that I visited her uncle’s grave and paid my respects. This will please her, as he is one of the 5 relatives she lost to both World Wars.

After a long journey, today we went to Ljissenthoek Cemetery and a wave of sadness came over me. I didn’t really expect to be as sad as I was. I have seen pictures of the memorials and I always knew it was a sad thing to see but being there and seeing pictures are two completely different things. 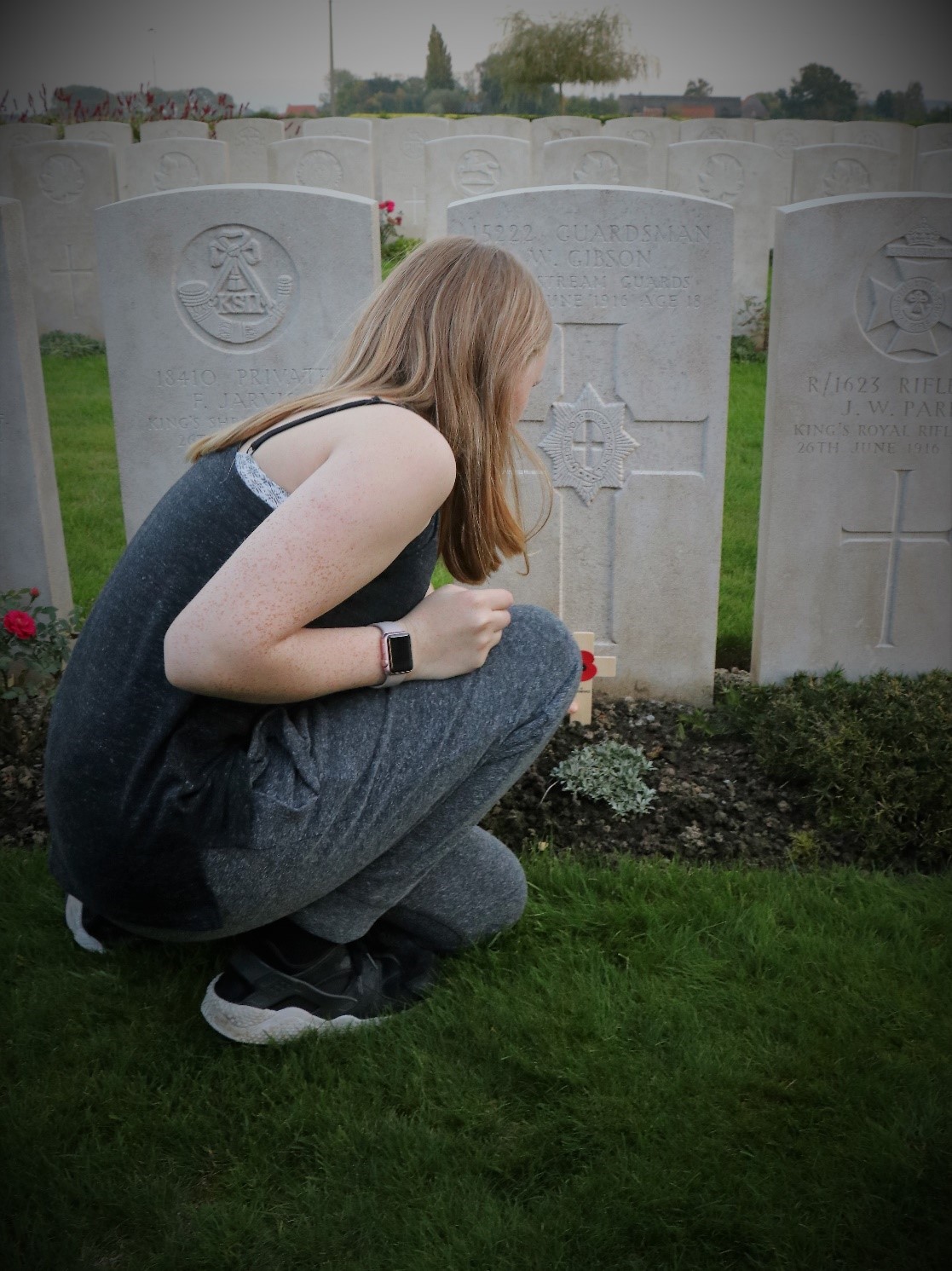 I got the chance to lay down the first remembrance cross on at the grave of William Gibson who attended Ulverston Grammar School and died on 27 June 1916 aged 18. I felt honoured to put down the cross because he was a member of our school and was so young. I found it very moving when I saw how many graves there were. I did feel proud because the more I thought about it, the more I realised what they did for their countries.