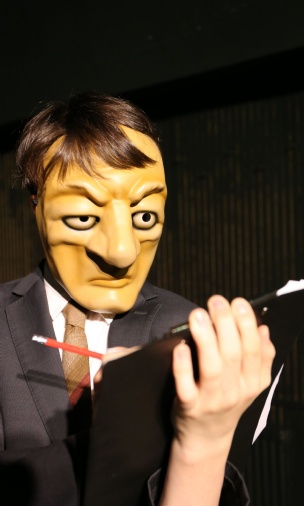 Our Day Out – a play for our times?

Aside from 4 or 5 professional theatre companies who specialise in Mask, British theatre – indeed western European theatre - doesn’t have a strong mask tradition. Despite this, Mask theatre is probably the oldest form of theatre on the planet and features strongly in all other cultures across the globe from Polynesian communities in Oceania, to the rainforests of the South American continent, to the highest mountain communities of the Himalayas. Rooted in ritual and shamanic origins, the Mask is a fundamental aspect to theatre around the world and yet somewhat enigmatic to British Theatre, which is a shame as mask theatre is strangely beguiling to watch. It was based on this point that the

students and I decided to take the challenge of turning a scripted play into a piece of theatre where communication had to be conveyed through action and gesture alone.

Our Day Out, Willy Russell’s much-loved play about poor children from Liverpool, proved so popular after being shown on TV in 1977 that it was converted into a full-length stage play. Its themes of living with a lack of education and opportunity and suffering social deprivation are as pertinent today as when it was written. When Mrs Kay’s ‘Progress Class’ are unleashed for a much-anticipated day’s coach trip to Conwy Castle in Wales, the class can’t wait to get away from the confines of school for a day of mucking about with mates. But sometimes the beauty of a place far removed from the reality of a life lived on the edge of poverty, only acts as a reminder of the empty future that awaits back home.

During the performances of our production it was noticeable how the masked actors were able to work their magic on the audience, projecting their inner monologues through movement, gesture and stillness in spite of the fact there were no words spoken! After all, it was Professor Albert Mehrabian who stated that 55% of what we take in through communication is the physical movement of the other person. Actions really do speak louder than words…

The students involved had to learn a whole new skill set of theatre techniques and, as ever I, am immensely proud of them for they have so successfully achieved. - Mr Vogler