World War 2 was not the first occasion on which Ulverston took in refugees or evacuees, nor was it the last.

In 1914 and 1915, hundreds of thousands of refugees fled Belgium as the German army advanced into their country. Those who were taken in by Britain were dispersed around the country, and one might wonder what the people who were sent to this small South Cumbrian town knew of where they were going.

One thing they may have had in common with some people in their host town was a culture of lace-making by hand: 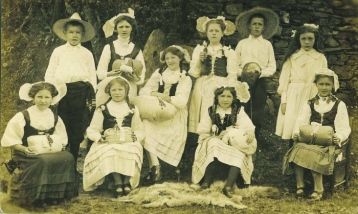 A number were taken in at Lund Hall, and most of the young men and some of the women commuted by train from Ulverston to Barrow to work on munitions production in the shipyard. There were even enough of them to form their own brass band.

One of the refugees who was billeted in Coniston but attended Ulverston Grammar School was Oscar Van Boxel. When in Form IIa, he wrote in the school magazine:

The voyage to Folkestone was uneventful. My heart grew heavier and heavier when the shores became more distant, and when they finally were lost out of sight, I wondered if I would ever see them again. When we arrived at Folkestone we had time to catch a train for London. We got there in the middle of the night. Several omnibuses were waiting outside the station, and along with several other refugees, we were put in one of them. We were taken to an hotel where we stopped for a week. At the end of the week we were told we could go to Coniston with two other families. The journey to Coniston took nine hours, and the time seemed to fly, as we were viewing the wonderful scenery. We finally arrived at Coniston at 7 o’clock, after a very pleasant journey.When I sometimes look at the mountains, I always marvel at the beauty of them, and think that it is very quiet and peaceful living here, after we have gone through so many exciting experiences.